Distilleries don’t just repeat what has brought them success and money over the years. They renew themselves now and then. Labels get updated. The taste and process updates. It is a very well known situation, that the whisky was much better during 80s and 90s, especially if you ask people who were drinking drams during those legendary decades. The No-Age-Statement (NAS) is almost a forced way where distilleries must aim at, if they have any hopes of bringing out new products to market in a rapid pace. And then there are renewals of old classics, like the Laphroaig 18YO. 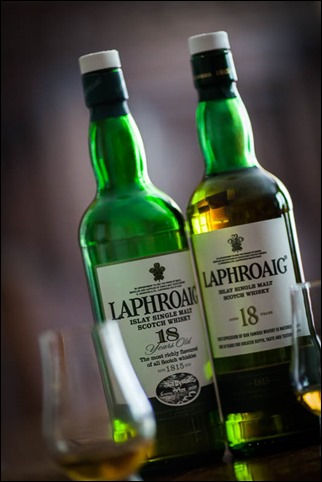 The most prominent note first: the labels are different and I must say I do enjoy more the older one. The green and “kinda clover like” approach is about a luck of the selected few who can enjoy it. It is classic (for me). The new design on the bottle and box are in line with everything else coming from Laphroaig these days, so I can see there is a need to do this. But since this is just the box and the label, I can skip it easy and concentrate on the bottle’s contents.

The color is very close to the same as before. Both are colored, so this is not a big surprise. Perhaps the old one had a slightly more matte surface, but it might be just me eyes wandering.

The nose and palate different. The nose of the old one is more tamed and broad, than the more eager newcomer’s nose. The young 18YO has energy, smoke and sharpness .. and less complexity. The smokiness of the classic version runs over the new label with a experience and steady surface. The newcomer has more phenols present.

The old version’s palate is strong and stylish. There is a pleasant smoke and Laphroaig taste that has improved with years. The recent version’s palate has more Laphroaig gings at the end, but the start is smooth. However, it does not feel as complex as the previous version. It missed the big smoke of the old version, but it is easier (=less experience) to drink. The finish however, feels more fresh and lasts longer. 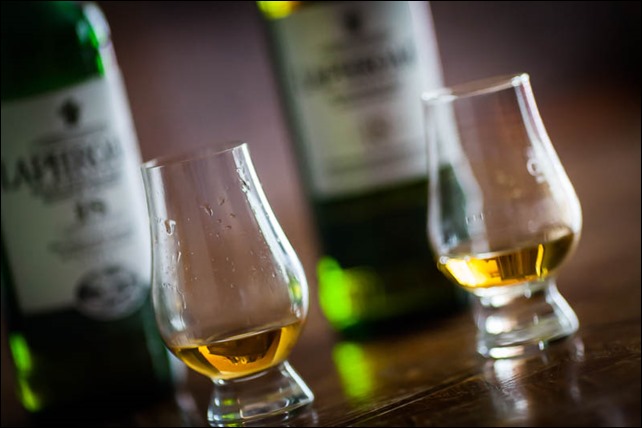 Both of these drams are great. There is no doubt of that. Spice and smoke, phenols and peat. They are strong, like brothers, but they have slight differences and they don’t always agree. The newcomer seems to be more hasty, perhaps suffering a bit from the modern day pace and challenges, but it does it job. However, if you have a chance to get your hands on the old version of 18YO Laphroaig – I suggest you use the opportunity.

I am sure, that in 5-10 years when the next update of Laphroaig 18YO emerges, it will provide similar feelings – that the current new one feels classic. And yes, in my opinion, they did Laphroaig 18YO better than these days. Of perhaps I was used to it’s taste… And I must point out, the new one’s bottle was just opened 30 minutes before writing this article. So it was naturally a bit necky and cocky. I will get onto this later, and do a short re-comparison.

Email ThisBlogThis!Share to TwitterShare to FacebookShare to Pinterest
Labels: Laphroaig

The Glenfiddich is a very well known Speyside product in Finland. It can be found from most of the bars, in case there is at least one Scottish single malt in the shelf. The other one is usually Laphroaig 10YO. I got a sample of this Rich Oak 14YO from a friend, after he heard I haven’t really encountered a really good and tasty Glenfiddich. For me, most of them are ok but there isn’t anything too special about them. They have some bitterness in them, that does not comply well with my receptors.

Rich Oak 14YO is matured in ex-bourbon barrels for 14 years first. After that, they get to spend 12 weeks in new European (Spanish, according to some sources) Oak barrels and finally 6 weeks in new American Oak. 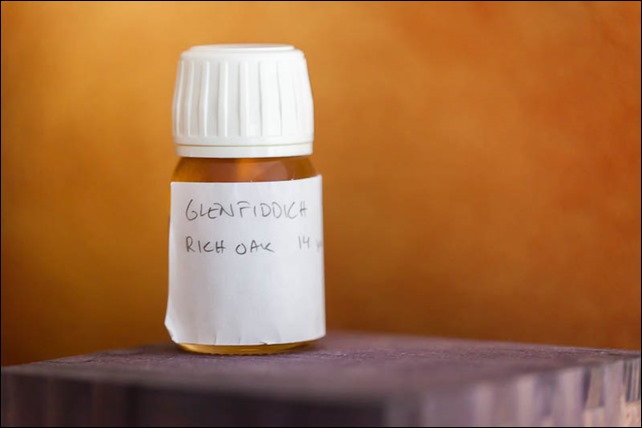 The nose is pleasant. There is lots of oak, but not a dry vanilla that usually strikes hard on the face. Instead there are fruits and spices woven to the oaken feel.

The palate is first very light. Very very light. There isn’t much body here, but after some time the oak gets some strength but it is still a delicate touch, like a elven scripture that can only be read during midnight moonlight. Second sip gets more power, and the oak grows in length and width. It shows some the roots it has, that go backwards into times of noble windjammers.

The aftertaste is still bitter, but with spices. It lasts a long time, but during that time you have sweet oak and pepper spices in your mouth. It is not smooth for me, but it does have some more distinct character than I originally feared.

I will keep on the search for a Glenfiddich that will cause a real wow effect for me.

The wandering man was wearing a long, dark, cloak that moved silently even when the wind was staying still. Nobody paid any attention to his hair or boots, since everybody was always focusing on his eyes and hands. His gaze was so intense, that you could almost feel the stone creeping upon your veins as you were petrified under medusa’s fierce stare. He did not turn you onto a form of statue, but you still played like you were one. It was the awe and the fear of the fear. You never knew, if it was the vastness of the universe behind his glowing amber eyes, or was it the emptiness of ceased stars that were drinking the energy off from the neighbor stars. If that was not enough, the hands closed the deal. Barren, rough, battle-seen fists seemed to be like those that can strike though a wall of the mightiest castles. And they did. I’ve seen it. It was not a man, it was a force of the nature. They all fled. They always did. When he emerged from the ruins, he usually brought a gift. This time it was this dram. Old, like his rugged cloak. He walked away, while I stayed and enjoyed the secrets of this strange old Uisge Beatha. 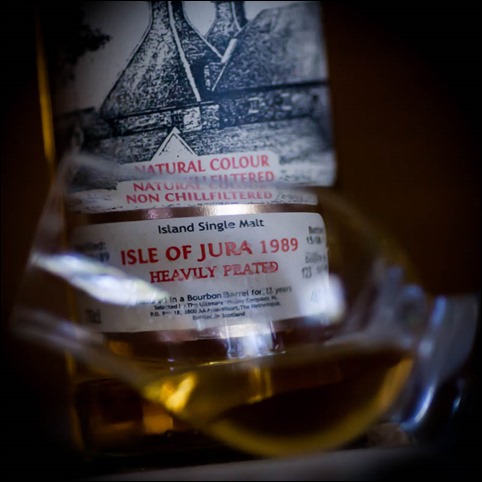 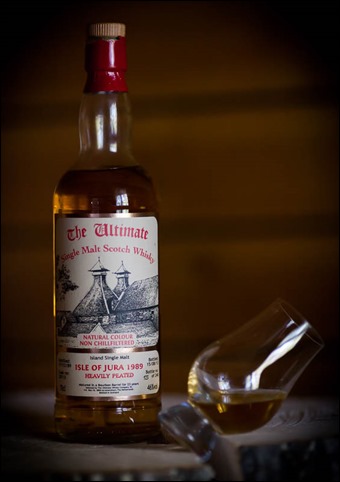 Colored like the man of mystery’s eyes. Amber tainted with gold. Perhaps a bit pale from the “ideal” color but nevertheless not bad. Pleasant and captivating. Sweet oils and nose, accompanied with vanilla, peat and remains of light smoke.

The taste of like a song of life. It begins soft and gains volume and power as it goes on. There are complex notes that emphasize the peat and fire, yet it remains soft and demanding. It does not have too much contradicting voices, but they all aim for the same star. It is always the second from the right. Peat dominates this world, but instead of being a Tyrant, it is a just King and a Seer who practices the secrets for the behalf of land and future. Sweet tones carry and when the song re-emerges from it’s journeys the sweetness gains more space and sings a duet with the peat. The song fades away slowly, echoing in the big hall for a long time.

This is a really extraordinary Jura who dances on tongues!

Email ThisBlogThis!Share to TwitterShare to FacebookShare to Pinterest
Labels: Jura

The strange little vial named “B”

Swapping samples is usually fun and a practice commonly shared with fellow bloggers – at least in Finland. No money, just an eagerness to hear what other writers (or whisky drammers generally) like about some uisge beathas. There are samples, which you know. And then there are samples, which are either numbered or labeled. This one was with a letter “B”. I think, it is not a half-B and it is not named Eric. But it does have a twist.

It has been a hot summer in Finland. And while my phone updates itself I can finally concentrate on writing something new – about the (half) B. As said, it’s been a wonderful summer here in Finland. Just shortly after the start of July it has been sunny, thunderous and hot. And I got this sample in June. Naturally, since I was busy with other mundane stuff like roof bricks and Midsummer Eve Whisky, I of course forgot this sample into a car’s glove compartment. It was there roughly a month and a half, boiling and gathering new characteristics. I just think, this one is not the same sample as it was when I got it from the Mushimalt. But there is not stopping now! 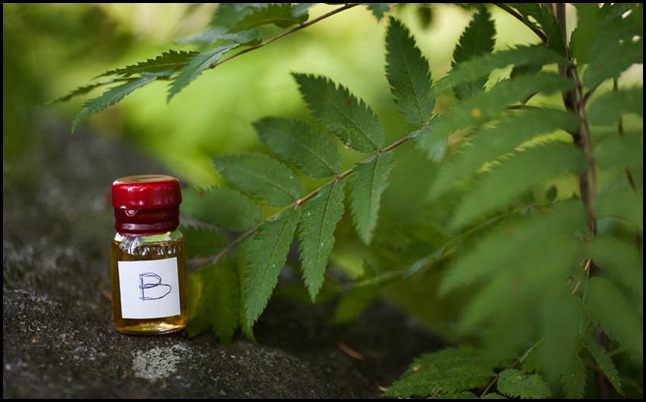 The nose is interesting. And this time in a good way. There are very familiar scents and feelings with this one. Mostly it reminds of a bourbon but not as a bourbon as I knew it at it’s worst.

The palate clears away the feeling of Scotch. It feels more like a bourbon. Not clean, rough, vanilla and dryness. Perhaps this is rye whisky. While tasting, there is a strong scent of grain and/or rye. The rough grain emerges more, once you get onto third sip. Grain produces a interesting memory of granary on a countryside.

The afterwards experience is something like a mix of moonshine, rye, barley and promise of the good party. The fading memory of events in the granary do emerge. This is not bad, but this one is not my favorite either. This kind of dram would serve nicely with a spicy fish food or barbequed chicken.