Recently we held a tasting for over 20 people as part of a celebration party. Our tastings usually have 6-12 participants, so this was a big leap forward. With smaller number of people, you can create a more intimate atmosphere and whatever you say, can be heard effortlessly. Where there almost 30 people, the playground is totally different. And when the tasting started, I found out that the people had gathered in, more or less, a big oval, which is good if you want to be heard and seen.

First, especially since some of the participants hadn’t tasted much whisky before, it was good to recap some guidelines: check visual elements such as color and oils. Tell about the nose, and how it changes over time. And of course tasting, palate and after taste. It is also good to remind, that people take small sips and don’t drink it bottoms up.

Originally, I expected something like 30-40 tasters so I had to include many full or near full bottles in the tasting. for QC there was a spare bottle in case the first one runs out.

This tasting had the following menu. 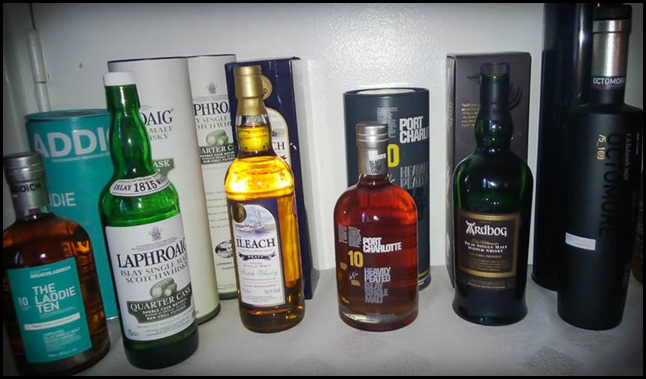 Some of those whiskies were unopened, so it was also good to explain to the attendees, that how it affects the taste and what is usually means.

Since it was clear that not everybody is not paying the full attention all the time, it was a celebration party after all, we chose to keep the facts minimum and focus on the story. And it was very clear, that the story – using wild imagination, did carry forward for attention and for feelings. It depends on the storyteller, on the whisky and of course on the audience and the situation what you tell and how.

Our journey started from shores of a Finnish lake, looking at the sunset. A walk to a rocky hill made us set up a small fire to honor the summer past. Looking at the night sky, we experienced the spectacular shooting star show and realized it was a turning point in time. Days turn to night, summer to autumn and new age is emerging.

The second part took us below. Finding a hidden cave and tunnel, which burned walls enclosed us as we descended into the deep earth, where the peat is born. Our journey went through the ages and history, where aged and burned armor, endless battles, ancient beasts and their bones marked the legends that were born there. Finally, when we had ventured into the early history we turned, and emerged. As millenniums raced forward, we felt the magic and we forged the legends to our kind. Undefeated, we emerged into the future, standing on the top of the mountain and celebrated the rising sun’s red beams that lightened rivers of possibilities in front of us. It was time to celebrate.

Texas Oak Fire, they say when the sky is filled with fire and brimstone. Those who know, nod knowingly. The smell is like a industrial city burning and forging metal on full speed. They work to the bone. Rocks fell, split and explode filling the streets with the age of efficiency. The smell is inescapable but once you stick in town a while - you get used to it. I got to taste a sample of this most alien Whiskey.

You take a bite. Then the bite takes you with it. Oiliness of those dark engines, blackness of those burnt oak branches. Inevitability of progress that sounds like a factory bell. The time is everything.

I have not had too many experiences with these American bourbon drinks. Most of them have been bad. Only two have remained on the list. This is one of them. No, this is not scotch. Yes, this is better than most of other bourbons. The name gets this one to half-way. The rest of the journey consists of smoke and spiciness. There is a character inside. There is a personality. Even a shallow one but it is more than most of bourbon's got.

I am most interested to see, how they will progress and how they will evolve.. Perhaps industrial town will have a new player who will throw their sabots on the machine and declare a renaissance and new era of taste, smoke and fire with brimstone that burns with a smile and lasting effect.

Email ThisBlogThis!Share to TwitterShare to FacebookShare to Pinterest
Labels: väärältä_maalta

Bruichladdich is releasing “imminently” new drams for us to enjoy.

Octomore 6.1. gets to a 167 PPM peatsmoke levels and is aged in American oak. Octomore 6.2. that is aged in Limousin oak Aquitaine. Some comments say, however, that it can’t be Limousin and Aquitaine since both seem to refer to a region. But nevertheless, I’ll be waiting for information. Photo by Bruichladdich!

Does anybody has any more details of these?