An extensive tasting with friends

Now and then we gather up with “the boy’s club members” and set up a whisky tasting session. A lots of bottles, food and sauna most often accompany the long evening. While the meeting is “the thing”, whisky tasting is the act that forces us to break some time from busy schedules and spare an evening together.
This time we had less attendees, but we did make it up by bringing more bottles per person than earlier. Never before we had 4 Octomores in one tasting!
Break
It was a very interesting – and talkative – night. The key to have this many bottles in one tasting is to keep your drams less than a dram.. Small portions, and you’ll survive! Octomore Orpheus was the clear winner (it went off the scale) but Octomore 6.2. followed right on it’s tail. This was one of the best tasting series we've had!

A short newsflash, what I’ve heard about upcoming Kilchoman products for this year. This is actually a month or so old news already, it somehow escaped my mind totally. But better late than never. I must say I am very curious and waiting with anticipation for these. I did enjoy all 2013 versions of these very much, so I am eager to see where they are going and how nicely Kilchoman matures.
I have loved especially their Cask Strength / club release bottles, so it is going to be a long wait ahead..
Planned Kilchoman releases for 2014 -
- Machir Bay 2014
- Loch Gorm (Spring)
- 100% Islay 4th Edition (Spring)
- Cask Strength Release (Autumn)
- Port Cask Matured (Autumn)
Posted by Vesku at 16:44 No comments:

Email ThisBlogThis!Share to TwitterShare to FacebookShare to Pinterest
Labels: Kilchoman

Short summary in English. The Organic Scottish Barley is one those rare (the only one?) truly organic whiskies out there. I did enjoy their earlier incarnation also, but I must say this one is even better. The nose is pleasant, it lacks the sting and bitterness that is usually present in this kind of drams. Perhaps the maturation in an american oak has done it’s work properly. There is no age statement, but it would be interesting to know some more details of this one. Perhaps one day the distillery will tell us.

This is a sweet dram in taste also. Not too sweet, mind you! Interesting mix of oak and wood is present, and the end result is surprisingly lot into my liking. This is not, however, a peaty or smoky whisky! Unpeated, less striking and easy to drink. It would be interesting to see how cognac people would like this one. I’d guess many to them would turn into whiskies. I’ve seen that happening already.. In this end, this has more bite and character – especially after drinking it a few drams. This is a good product, something I could like to accompany me when spending an evening, yammering with people. 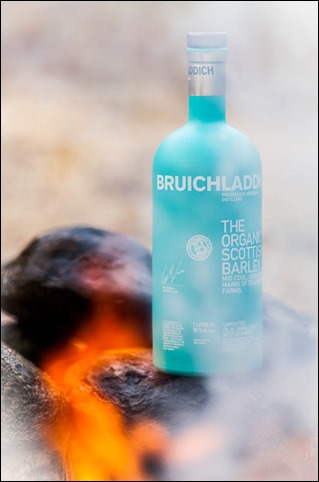 Email ThisBlogThis!Share to TwitterShare to FacebookShare to Pinterest
Labels: Bruichladdich

A few more photos of this famous PC11 whisky. The Dram was not harmed during taking these photos, but the bottle itself got a nice tar-coating being near burning pine bonfire. The result is, that the bottle has not a very smoky-tarred character of it's own. 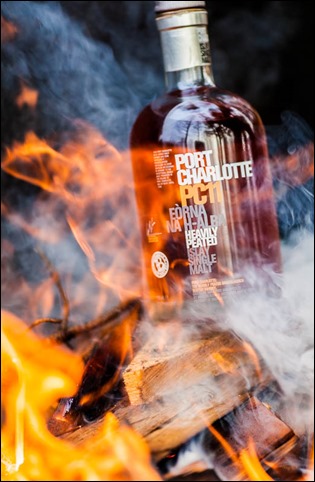 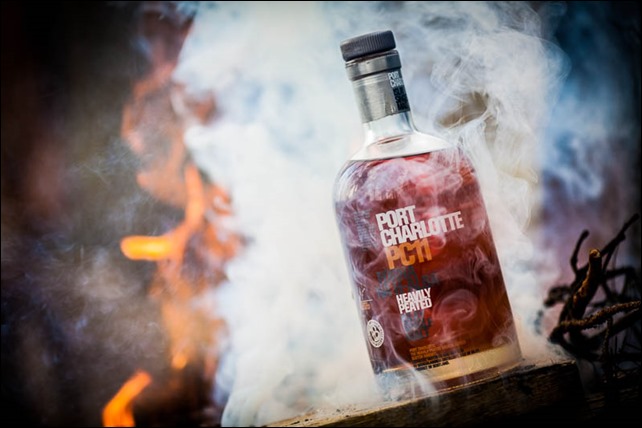 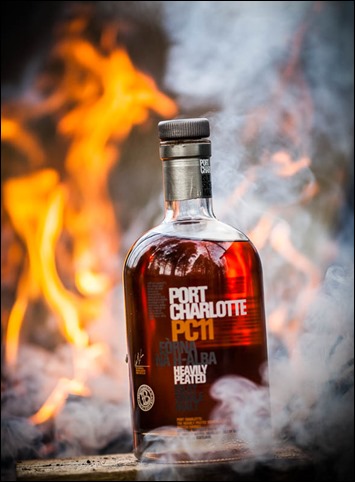 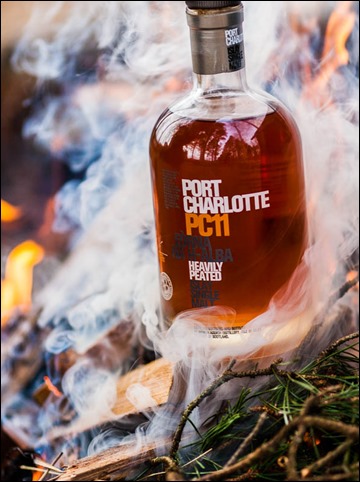 I just found out that Bruichladdich wrote an article about this blog to their news! http://www.bruichladdich.com/news/whisky-reviews/tales-of-the-smoke-and-peat
I am amazed and happy, dazzled and of course very glad that photos and stories have made a good impression. Big Thanks for Bruichladdich for this honor!

This is, obviously, a good time to share a few more photos of Octomore 6.2., that were not included in the original post! 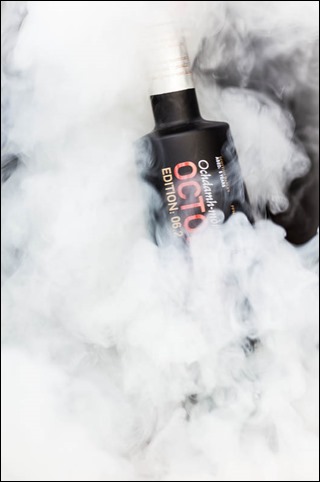 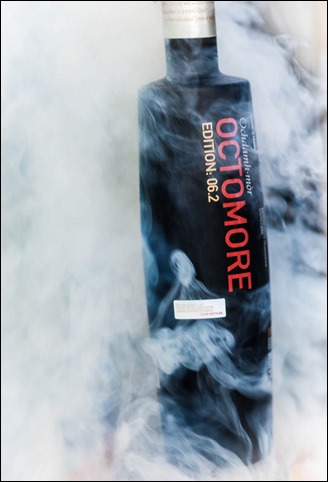 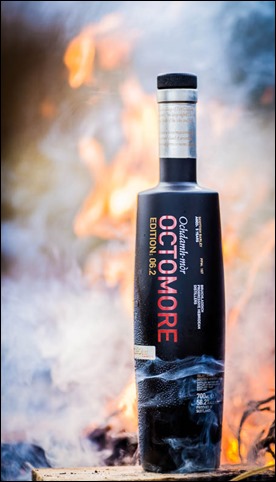 And finally the black and white photo in original colour. To me they both work very well, but of course express a totally different mood and feel. The stories do matter! 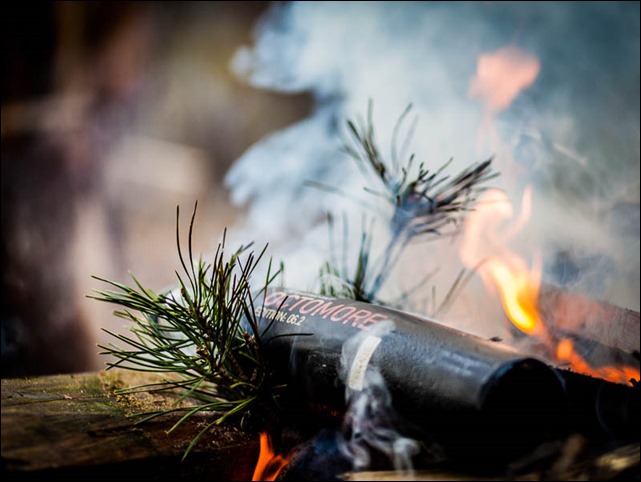 Email ThisBlogThis!Share to TwitterShare to FacebookShare to Pinterest
Labels: Octomore

The names. The names are getting longer. But when you do it in style, they are an excellent addition to the story and will tell the tale of their own. This one I can’t pronounce but most of the Gaelic escapes my tongue anyway. What does that mean, I don’t know but I am curious to find out. Alba most likely refers to Quercus Alba (American white oak). 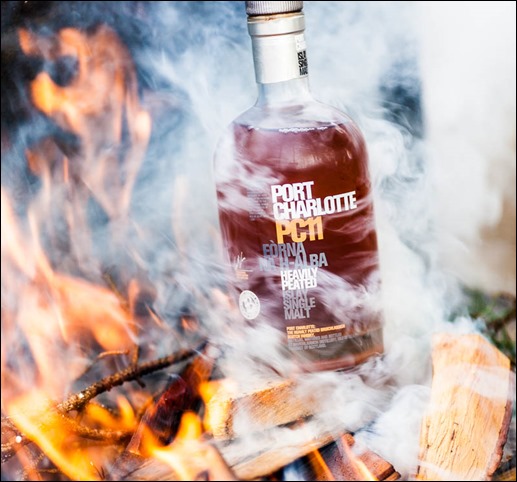 When I poured a dram to my nosing glass, I noticed immense smoke and tar that were strongly present. Also, I did notice that the bottle was very sticky and covered with some substance. For a brief, less than a second, I got worried but then I realized why this had happened. When we took photos of this whisky by (and in..) a bonfire there was a lots of pine and pine’s needles. So this bottle is now covered with some tar, that will produce it’s own nosing qualities when present in a room. Usually, I don’t mind smoke and tar, but this may affect my story a bit. However, whisky itself was not harmed when taking photos. 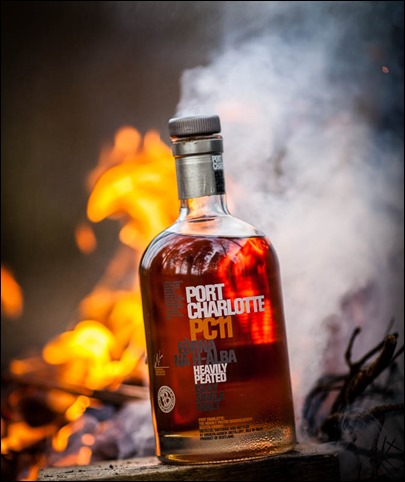 This was indeed a hard to find bottle for me. It is a travel retail limited edition only, so you can’t find it outside airports and such very easily. I had already lost hope and almost booked up a flight to Scotland, but luckily we took a ferry to Estonia (from Finland) and to my surprise (and amazement) there were lots of these bottles – and in a reasonable price too! For less than 80 euros, it was not bad find!

PC11 is bottle at cask strength (59.5%) and it is the oldest of Port Charlottes (11 YO) so far. Matured in premium oak casks and finished (or matured, I don’t actually know) in ex-sherry casks this is a interesting combination. PC series has grown interestingly over the years. I got into these with PC7 and PC8 and got to taste PC6 at a whisky pub, so I am very happy to add this dram to my list!

There is no coloring and no chill filtering. Raw and pure, the color is sherry tainted red. Almost a classic look. The nose is strong and filled with alcohol. Some sherry but due to taking photos lots of tar and smoke are present. Let’s just say, if you have a flu – this will open up your nose if you inhale via it deeply.

The taste waits for a split-second. It gathers strength and then attacks with a haymaker using a telemark style. None of the drunken boxing is present, but the blows hit deep. Sweet sherry, harsh character, peat and oak kata do find their way through your defense. Rawness has power and character, but after a moment it will settle down and you will feel warmth and joy. This is not a nonsense whisky, it has a big boom and demeanor of a angry bull with bad temper. You may fear, but you will laugh. This is not meant to taken lightly nor easily. It is about the aftertaste and sensation where you will ascend and descend at the same time. Dragon’s will feel envy towards this one’s fire. Use small sips and enjoy, this is a dram of my style.

The taste afterwards is sweet and includes sherry. This is not a peat nor sherry bomb, but more balanced in that sense. Tasty and pleasant, that will leave you feel the warmth for a long time.

Usually I don’t do this, but I did add some water to this dram as a experiment. The dragon is gone, but instead it is easier and has more complex taste. Of course, right after the full attack, it feels a bit bland but not bad, not bad at all. With some added water, it is easier to enjoy and to taste – so in case you want to offer this to your less experienced friends, instruct them how to add a drop of water.

I must say, that it was indeed a difficult path to get one of these bottles to my hands. Since Bruichladdich’s latest incarnations of Octomore and Port Charlotte PC11 are sold in travel retail only, it’s been extremely hard to find these drams. Finally some bottles arrived onto Finland-Sweden cruise ships, but the difficulties did not stop there. At last, asking around came to conclusion.. I received a bottle during Christmas! the joy and the delight, after the holidays it was time to open the bottle.. and to notice it was severely faulty at the cap! Fully wet, it had leaked also some of the precious contents out – and the cap broke due to it’s wetness when trying to pry it open. At that point I decided, it is pointless trying to proceed and instead admit that Octomore 6.2. was out of my reach. It must have been destiny. Perhaps it wasn’t such a good dram after all.. 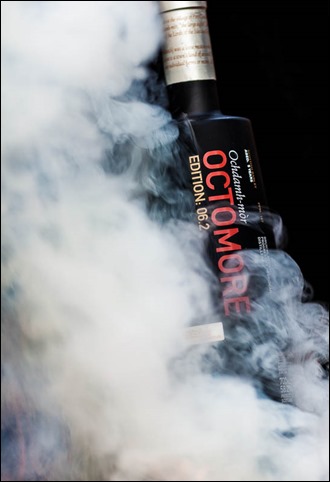 But since I am writing this article, new arrow of destiny hit deep onto my backside. When travelling to Tallinn for a day and browsing ship’s whisky shelf there it was.. PC11 and on top of that, there were many bottles of Octomore 6.2. present too! Oh joy, it was Holidays all over again! Finally, finally, I got the bottle for opening and one for long term storage. And yes, I did check caps of all bottles before paying for those. the luck had turned!

Yesterday, it was a great day to remove the metals of Octomore 6.2. – again – and finally hearing the pleasant sound when the cap is retracted. Pouring the dram onto Glencairn glass ended the long await. Sure this liquid had lots of anticipation dripped into it.

What is Octomore 6.2.? It is the latest 5 year old Octomore, which has been matured in ex Eaux de Vie (French Limousin Oak) barrels. Eaux de Vie needed some searching, but I found it was French water of life , clear colorless fruit brandy. Octomore limited release is 18 000 bottles and it is stored in it’s potent form (58.2%).

The color is light and resembles amber. Nose is strong, but not too attacking. There is lots of peat and smoke present, but also sweetness and vanilla. It begs for a taste, and I am most happy to oblige.

The taste has first traditional Octomore qualities. It is strong, peaty and smoky. Put a hot coal in your mouth, and you know the feeling. Surprisingly quickly, however, it turns onto sweetness and less harsh. Lots of similarity with Comus (4.2.) due to sweetness but this one is easier to enjoy that Comus was. This is a dance in the local club, you don’t go for the medieval party this time. There is joy, there is happiness and character. Indeed, 6.2. is an interesting mix of peatfire and fruit sweetness. 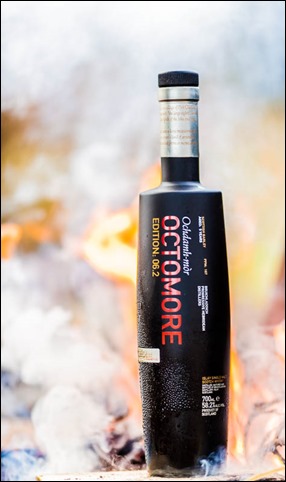 The aftertaste is shorter and less vibrant than usually with Octmores. There is no strong ending, it just fades away. What this lacks, is some kick. It is a bit too easy, too sweet and domesticated than I expected. Looking for strong tastes, there isn’t none that is over the top than usually.

Later, after a while – the oak and vanilla find their way into my tongue and mouth. With oak, the taste is somewhat bitter and really woody. Like chewing a treant or fine oar.

Overall, I do love this whisky. The journey to find the bottle insists that I like it, or I weep and like it. Tasting past that, this is not as big hit as I wanted this one to be. It is a good whisky. Great whisky. And compared to some earlier Octomores, the price is a bit more reasonable (less than 100€ anyway). It is easier, classy, domesticated and most likely will attract more Octomore friends than earlier, harder, versions. This won’t be the whisky to ends the tasting series, but it is still breathing, panting and kicking – being alive – and will stand tall and proud amongst most of it’s Islay fellows. 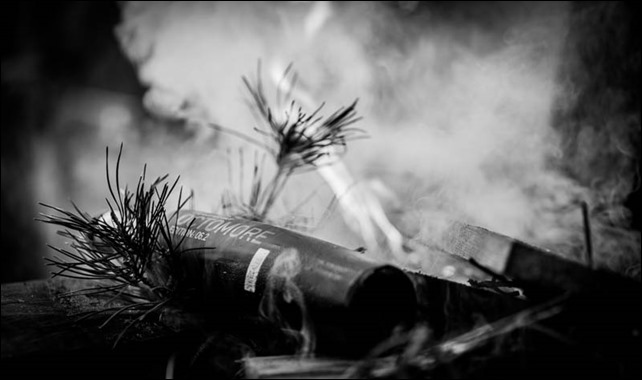 (no Whisky was harmed while taking these photos)