My first encounter with Ardbeg Auriverdes

After a long journey, I arrived at my pilgrimage. The ancient location, hidden in a corner of famous tale filled streets, was not visible until I was told directions and how I would find it. After steps, which I didn’t count, I arrived and opened the door with a eager rush. I didn’t know what to expect, but I was ready to bow in honor of the location and it’s people. What happened, I did not expect. It was a warm welcome and there was no need to explain the reason. They already knew, why I was there. This, at Angle Terre, is where I got my lips to taste the mystical Auriverdes the first time. 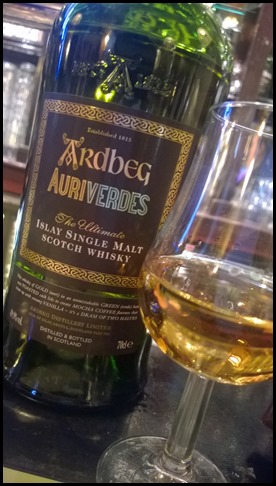 It took me a while, to get used to the nose and the body. Auriverdes was not just a average potion, you get from a common hold. No, instead it is a golden sickle, that silently cuts the ancient oaken branch. It is the sound that a few hundred years old oak makes, when it’s leaf filled extremist drops onto the earth and makes a crumble that echoes throughout the still forest. It is the ripple on the pond’s water that wakes the ancient fish of pray from it’s century long sleep. It is the hunt and not the pray.

The nose contains pleasantly smoke, sweetness and.. mocha. It is rare for me, to find out that this is a dram that really has the characteristics of a coffee. The nose is not strong at first, but if you move back and forth between different drams.. you notice it’s strength. Later the tar emerges real nicely.

The body is soft at first, but it gets more army behind it’s message than you would expect. There is smoke, spices, coffee again and the toasted wood. It is the chest of treasures, that was forgotten to the cave for eons and it is not presented to the sunlight the first time since. Dazzling gold, pearls and also some rusty blades.

The Auriverdes is a iconic whisky, I concur to this what many have said already. The nose, the body, the colour and the finish are all great and what you would expect, if you explained whisky to somebody new. Is this a good or bad thing? It is up to you. I do like Auriverdes – based on this tasting – a lot already. It is the not the last note, but it carries the song forward.

On the second sip the sweet coffee is much more strongly present. It is bold, fierce and at the same time it is tame and gentle. Smoke and burned fields follow the lead. This is a nice experience!

Email ThisBlogThis!Share to TwitterShare to FacebookShare to Pinterest
Labels: Ardbeg