Kyrö Distillery Company ( http://www.kyrodistillery.com/ ) is one of the latest whisky producing ventures in Finland. As you already might know, KDC is not facing a easy task due to limitations in advertising or even telling about it’s products. They are still on their first steps, but they surely know how to do their magic on drinks! 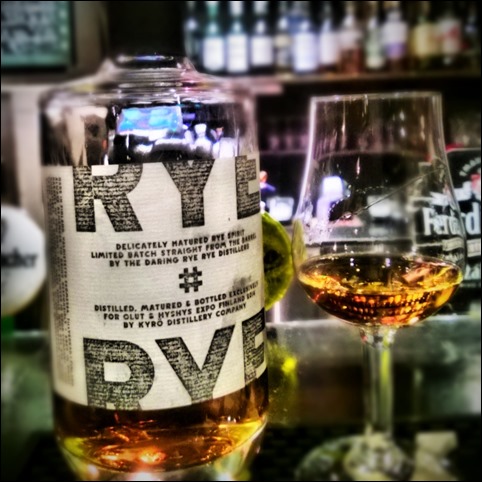 I unfortunately skipped the Beer & Whisky (hush hush) festival in Finland during October. In that fair KDC introduced their single cask hush hush booze they call #. Yes, just the hashtag. And of course, they whisky word was replaced in the label with hyshys (hush hush) to honor the Finland law. KDC guys have a great sense of humor too.

The # is a wonderful drink. It is not yet whisky, since I hear it has been matured only for four months so far (they just started this year!). But in a few years these dramlings will grow and expand to a whole new level. The way I see this dram, I would not mind owning a bottle already!

Simply put: the best rye I’ve ever tasted. The nose is sharp, but filled with crops of rye. It is a rye bread, that has been produced in a traditional Finnish way and it just got out of oven. You take a knife, almost burning your fingers at the hot bread, and you cut down a slice. It is not easy, since it is too warm and too soft. Perhaps a bit raw in the middle.. But once you get it cool down just a bit you make your move and grab a bite. It suits Finnish taste exceptionally well.  There is rye everywhere and the palate continues this experience. There is some sharpness and burn, but once you get to second and third sips those fade a away much more.

Afterwards you still have a wonderful taste on your mouth and tongue. Rye. Just like a field of rye dancing under the hot sun during August big celebration. This would be perfect drink for middle summer festivals too.